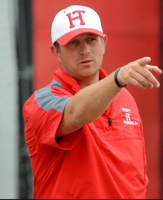 In high school coaching, Coach Maulin enters his eleventh year as the Head Baseball Coach at Hewitt Trussville High School.  In the previous eight years at Hewitt Trussville, his teams have gone 221-78 with one state championship (2016), two-state runner-ups (2013, 2018), a final four appearances (2019), and four area championships.  He has sent 39 players to play college baseball in eight years and has had two players (Grayson Jones, 11th round Atlanta Braves) and Tyler Tolbert (13th round Kansas City Royals) drafted in the major league draft.  After making it to the 7A state semifinals in 2019 (the fourth time in seven years), Coach Mauldin is looking forward to the challenge of continuing the process of building a program that will compete on the state and national levels.  Last year his team was ranked # 2 in the 7A Alabama State rankings when the season was canceled due to COVID-19.  He currently has former players playing at the following schools:  Auburn, LSU, Tennessee Tech, Troy, UAB, Alabama State, West Alabama, Bishop State, Coastal Alabama East, Northwest Florida State, Snead State, and Shelton State.  One former Husky is playing professionally, Tyler Tolbert is in the Kansas City Royals organization.

“We are looking forward to year nine of the building process for our program. The last eight year’s teams laid a great foundation of what it takes to be a champion on and off the field.  It is very important for our current players and coaches to continue the building process.  Our varsity, JV, and middle school programs all play championship-level baseball and respectfully represent our schools and community on and off the field.  We started to build a winning attitude, and we will continue the process of having a winning culture.  Our city of Trussville has greatly impacted our teams’ success in the last eight years.  The community support has been unlike anything we have ever seen. Seeing thousands of Trussville fans pack out Phil English field and travel to Montgomery for the state championships is what our city is about.  We look forward to the continued support from the great city of Trussville as we work together to build a program that our community will be proud of for many years to come.”

Mauldin previously spent six years as the Head Coach at Pelham High School, where he compiled a 176-51 record.  His teams won four area championships in his six years as the coach of the Panthers, reaching the quarterfinals of the state playoffs twice.  His teams were ranked repeatedly #1 in the state and were a mainstay in national polls, including a stint as the #1 team in the nation in the max preps high school poll.  Mauldin sent 29 players on to play at the college level over his six years, including 10 of these at the Division 1 level as well as four drafted in the major league draft, Alvin Hines Washington Nationals, Tripp Martin Texas Rangers, Trae Santos San Diego Padres and Parker Curry Los Angeles Dodgers who is still currently playing.

Coach Mauldin spent seven years at Clay-Chalkville High School prior to Pelham.  While at Clay-Chalkville, he compiled a 218-62 record.  His teams won the 2003 state championship and finished runner-up in the state finals in 2005 and 2006.  They were also the area champion in five of his seven years (2000-2006).  Aside from the wins and championships, his teams sent over 45 players to play at the college level.  His players have competed in the SEC, Conference USA, Ohio Valley, SWAC, many Division II schools, and the finest Jr. Colleges in the state of Alabama.  Four players were drafted in the Major League Baseball draft in his seven years at CCHS, Josh Styes, New York Yankees, Kyle Roberson, Los Angeles Angels, Justin Standridge, Tampa Bay Devil Rays, and current Hewitt assistant coach Daniel Adamson Houston Astros.

Mauldin was a pitcher for UAB from 1992-1996 under head coach Pete Rancont and pitching coach Jim Case, now the head coach at Jacksonville State University.  While at UAB, he was a part of two Great Midwest Conference Championship teams in 1992 and 1994.

A native of Danville, Virginia, Mauldin graduated from George Washington High School in 1991.

Birmingham News East, West and North Coach of the Year

Alabama High School Athletic Association 6A Coach of the Year

Jefferson County 6A Coach of the Year

Alabama High School Athletic Association 7A Coach of the Year

Coach Mauldin coaches with the East Coast Sox in the summer.  His coaching highlights for the Sox are:

Mauldin is married to the former Chrissy Johnson of Birmingham, holds a degree in Elementary Education from UAB, and is also a Hewitt Trussville High School graduate.  She is a 1st-grade teacher at Paine Elementary School.  They are the parents of one son Tyler, 19, and two daughters, Sara Grace, 17, and Caroline, 15.

Over 110 players played at the college level