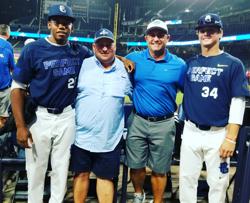 After graduating from college, Coach Sykes was in several business ventures that he later sold and pursued his love of athletics and coaching.  From 1999 until 2012, Coach Sykes coached high school football,  baseball, and track in Columbus, MS.

With Coach Sykes's leadership, he has taken the nationally recognized East Coast Sox to prominence in their mission for Christ with his knowledge and passion for Jesus.  The inspired Sox cross logo has been a staple of Sox witnessing while the teams play all throughout the country.  His vision has been felt all over the country, and we are blessed to have his leadership and Spirit for Christ manning the East Coast Sox.